Biden vs Trump – Leadership in a cloud of unknowing 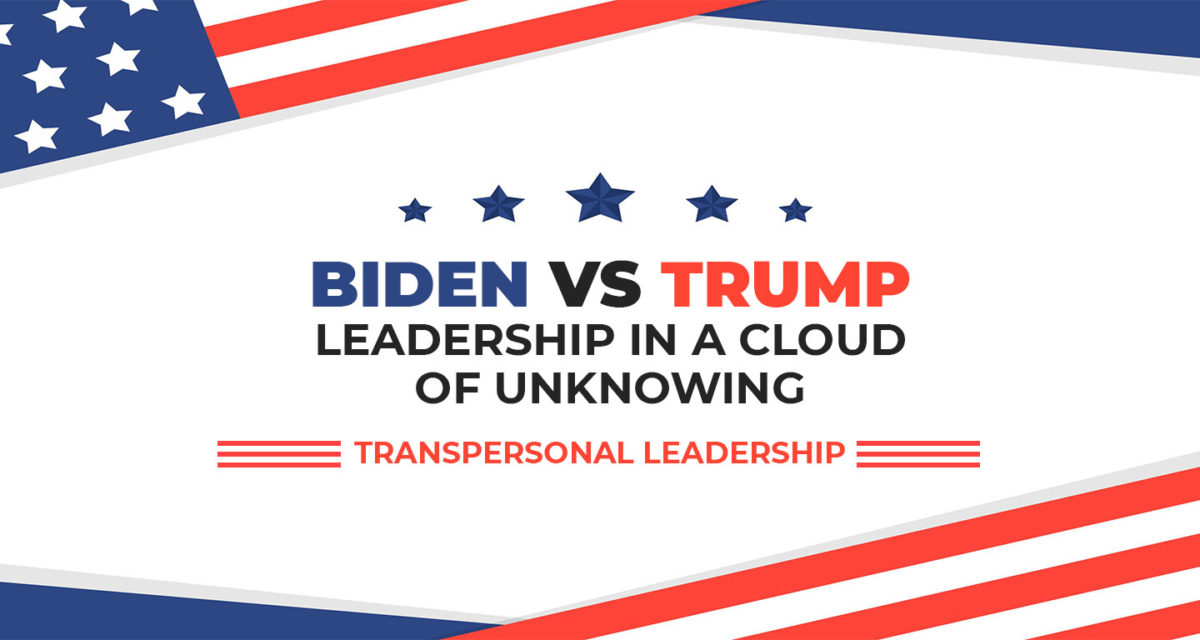 The silent inward warrior vs the externally bold worrier
How Trump vs Biden lead and their respective leadership styles.

Not everyone is interested in the management dimension of how the current volatility of the federal government of The United States of America is managed from the White House; but they should be, considering the influential power of the USA government on the global macro environment.

The Trump presidency, generally perceived as combative and vindictive was for most of the latter part of their term, preoccupied with the catastrophic mismanagement of the Coronavirus pandemic in the United States, was finally met face to face with what many saw as an unconquerable opponent on the 3rd of November 2020– Joseph Robinette Biden Jr.

Although most Americans and Non-Americans had their preference of who they would like to see in the Oval Office, on 7 November 2020, the people had spoken. Joseph Robinette Biden Jr. was elected the nation’s 46th president in a repudiation of President Trump and thus ending a presidency that seemingly convulsed American politics, shocked the world, and in many’s opinions, left the “United” States of America more divided than ever before.

Yet again the spotlight is on the ongoing debate surrounding dysfunctional leadership and its effect on global leadership in crisis.  Of interest for us though, is how these two leaders responded differently to the challenges of civil unrest.  How each showed up differently and in the process revealed their priorities, ideas and convictions about leadership, power, control and government itself.  Although the objective experience was the same for both, how they made sense of it and how they framed it through their own maps of reality drove different outcomes.  Both are focussed on the establishment of a safe and secure environment, but yet they showed up completely different in their behaviours and conduct.

All of us fall prey to one or more subconscious addictions to our world views and neurological programs to joy, happiness and success. This happens in one of three ways.  All are present but one is normally more prominent as the belief systems within, that drives our behaviours:

Unfortunately, all of these “naturally” developed early childhood and socially reshaped ego-centric survival programs, are flawed and false.  True joy, happiness and success do not come from one’s environment but rather from within.  Emotional intelligence is seen and accepted as a key attribute in our ability to become aware of our personal and prominent triggers to joy, success and fame.  Emotional intelligence involves awareness and control of such signals, and the self-discipline that prevents personal psychological needs from distorting what it is we choose to become. In the terminology of modern leadership theory, Emotional Intelligence is the self-mastery, discipline, and empathic capacity that allows leaders to channel their personal passions whilst attracting others (Nye, J. S. 2016).

Emotional intelligence includes two major components: mastery of the self, and outreach to others (Nye), and it is here that we note the obvious and somewhat blatant differences in the leadership approach between Biden and  Trump.

Many disagreed with Joe Biden’s approach and policies, but still, he is widely regarded and known as a caring person, who is able to connect with people from a wide variety of backgrounds (Deutshendorf, H. 2020).  Donald Trump, on the other hand, struggles in this regard as it seems he often brings out strong feelings of dislike towards him as a leader (Deutschendorf).  An example of the glaring differences in approach was brought to the foreground during the final presidential debate, where Biden disagreed with Trump regarding the children of immigrants that were generally being detained in somewhat questionable circumstances at the time.

Biden has a clear desire to be a national leader and healer, with a strong desire to unite the nation.  He is anxious about the USA’s deteriorating socio-economic situation and especially concerned about the general standing of the West to the rest of the world.  Biden feels strongly that whilst the USA is struggling with division and local instability and infighting, China continues to capitalise on the situation as they quietly garner ever more global power and influence (Bishara, M. 2020).

Trump on the other hand has cultivated the image of a bold warrior who does not recoil, rest, or retreat, with a true and honest focus on wealth creation with performance measurement in financial deliverables.  The typical organisational leader preoccupied and over focussed on goals, financial outcomes and ROI (Return on Investment), but almost always at the cost of relational health and wealth.  Trump’s often perceived abrasive style of power leadership may have alienated many at home and abroad, but strangely enough, it also convinced his supporters that he is an indispensable fighter for the nation and that his loss would be America’s loss.  Unfortunately, it is here that the strong scent of dualistic egoism emerged exposing the core pillars to dysfunctional leadership behaviour.

Commentators in the New York Times, Washington Post, Wall Street Journal, and other outlets have come to the same conclusion that the 2016 election could be seen and labelled as the “authenticity election”.  Donald Trump, after all, went from a novelty candidate to a nominee because of his perceived “authenticity”,  but as leadership guru Bill George has noted, “authenticity” runs much deeper than the Webster’s definition of “real or genuine or true to thyself” (George, 2020), and the last thing the American people signed up for was a leader true to his, self-serving Ego-self.  In the short term such leadership behaviours could even inspire, but in the long term always runs out of stamina, are exposed and eventually they do self destruct.

True Soul-centred authenticity has its source within a beingness beyond ego, personality, thoughts and emotions, with its roots in man’s natural neurological wiring for unconditional love, compassion and care for all of God’s creation.  This paves the way towards the Transpersonal Leadership Brand.  A leadership approach rooted within attributes like vulnerability, humility and comfort within a cloud of unknowing that consistently delivers ethical, caring, sustainable and performance-enhancing solutions, within volatile, uncertain, complex and ambiguous markets.

Will Joe Biden rise to the challenge and become this leader for the people of the free world? I suppose only time will tell.

Who is the current president of the United States

Joe Biden is the Current President of United States

What is Donald Trump's Leadership Style?

Exclusive, rigid and constrictive.  His behaviours generally defensive, manifesting as offensive, whilst fears of vulnerability emerge driven through anxieties of being excluded and not accepted.

What is Joe Biden's Leadership Style?

He comes across as inclusive, flexible and expansive.  His behaviours and intent of openness and inclusiveness manifest with less fear of vulnerability, as he shows a sense of being accepted and not rejected.

Want to be the first to know when we release new articles?
Sign up for our newsletter!